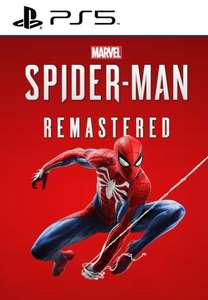 
Dive into the chaotic life of Spider-Man with the new and improved version of the original critically-acclaimed title - Marvel’s Spider-Man: Remastered PS5! Insomniac Games and Sony Interactive Entertainment teamed up to completely rework this smash hit for an overall better gaming experience for console users. Jump into the role of Peter Parker, the friendly neighborhood Spider-Man, who is a bit older and more experienced in this universe. Help him balance his hectic everyday life as a civilian with his career as the crime-fighting hero that everyone in NYC can trust as he battles so save the city from impending doom. Buy Marvel’s Spider-Man: Remastered PS5 key and become the great hero once again!

Marvel’s Spider-Man: Remastered features
Experience the thrill of being one of Marvel’s most beloved heroes as you swing across a stunningly detailed recreation of New York! Engage in dynamic battles, interact with citizens, and unravel the mysteries hidden in this sprawling American metropolis!

•Be the hero. Peter Parker has over 8 years of being Spider-Man under his belt - his actions are more fluid, acrobatics more dynamic, combat more explosive, and character all the more fun;
•Original story. New York City is under threat once again - help the web-slinging hero save the city from complete destruction;
•Well-known cast. Meet iconic characters from Peter’s life, all reimagined and taking up unique roles;
•Dynamic combat. Our hero is no longer a rookie and that means that he knows how to use the environment to his advantage - use epic takedowns to defeat every foe;
•Stunning open-world. Various points of interest are scattered around NYC - players are free to explore everything it has to offer;
•Cheap Marvel’s Spider-Man: Remastered price.
Be greater
With Marvel’s Spider-Man: Remastered PSN key, you get to walk in the shoes of the iconic hero of NYC - Spider-Man! He’s been fighting crime for 8 good years now and it shows in the way he swings around the city, talks to the pedestrians, and engages in combat. As usual, a new evil force threatens the safety of the city - after the hero captures and imprisons Wilson Fisk, the Inner Demons begin seizing his assets in the hopes of acquiring Devil’s Breath, a lethal experimental chemical. Unfortunately, that isn’t the only danger present in the story and soon everything collides into one big mess that could destroy everything. Buy Marvel’s Spider-Man: Remastered PS5 key and immerse yourself into a gripping story that tests Peter Parker’s will and morals!
PostTweetDelen Deel via WhatsApp Deel via Messenger
Community Updates
19 Reacties
Plaats reactie